Warframe is a free to play sci-fi third person shooter game. It is available for free download and play for Windows based PCs, Xbox One, PlayStation 4 and Nintendo Switch. The game will also be available for the PlayStation 5 and Xbox Series X consoles when those release later this year or next. The game does include add-on packs that can be purchased but these are mostly cosmetic changes and do not include any pay to win aspects.

How to Play and Where to Download Warframe for Free

Warframe is available for free from Steam digital distribution platform for Windows PCs. The Xbox, PlayStation and Nintendo Switch versions can be installed from the respective Xbox Live Marketplace, PlayStation Store and Nintendo Game Store. Players will need to register their email to create an account in order to play.

Warframe is a multiplayer online third person shooter from Digital Extremes. The first release for Windows came in 2013 with the Xbox and PlayStation versions following up in late 2013/early 2014. The game includes is a co-operative multiplayer game that includes role playing game elements.

In Warframe, players take on the role of a Tenno, an ancient race of warriors who were masters with swords, guns and Warframe armor. After surviving the old war they went into cryostasis and have recently woken to meet a new threat to the planet, the Grineer.

Since its release, Warframe continues to receive patches and updates. These updates include game play enhancements, net content and more. To date there have been six expansions released, all of which are available for free play. 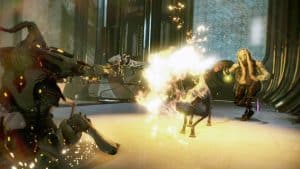 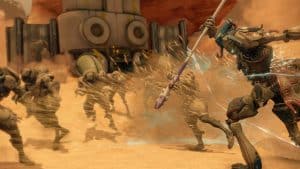 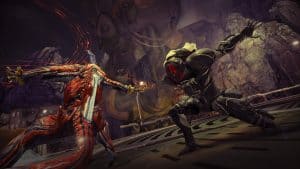 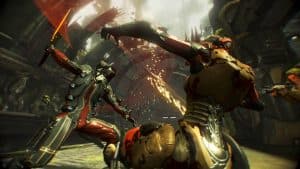 The game opens with an opening background cinematic story, after which players will choose one of three Warframes. Warframes are an exo-skeleton/skin that serves as a suit of armor. This provides you with protection from enemies as well as special powers. The three warframes are Excalibur, Volt and Mag, each having their own benefits and powers. The first mission in Warframe then provides an in-game tutorial and gives players the chance to choose their “blade” or melee weapon, primary weapons and secondary weapon.

Warframe includes elements from multiple game genre including shooters, action RPGs, and stealth games such as Assassin’s Creed. Once the player’s character they will have ability to begin missions. The missions take place across the solar system and can be played in solo mode or as co-op with four players total. Missions are random and contain various objectives that players must complete to succeed. Players earn experience, in-game currency and level up by completing these missions. This in turns allows player to upgrade their abilities, weapons and more.

The game also features a freedom of movement allowing for Parkour type movement such as Double Jump, Sliding, Wall Dash and more. These advanced maneuvers can be enhanced through the character’s Warframe and upgrades earned in game. The game does include a player vs player mode in addition to the solo and co-op (PvE) modes.

How Free Is Warframe ?

Warframe is free! You should not have to pay anything in order to play.

Is Warframe Free? Warframe is a free to play sci-fi third person shooter game. It is available for free download and play for Windows based PCs, Xbox One, PlayStation 4 and Nintendo Switch. The game will also be available for the PlayStati...
7.3
Average User Rating
18 votes
Rate This Game!
Your Rating: 0
Submit
Write A Review
Genre:Action Role Playing, Third Person Shooter
Free Guage:Completely Free
Platform:Mac, Nintendo Switch, PC, PlayStation 4, Xbox One